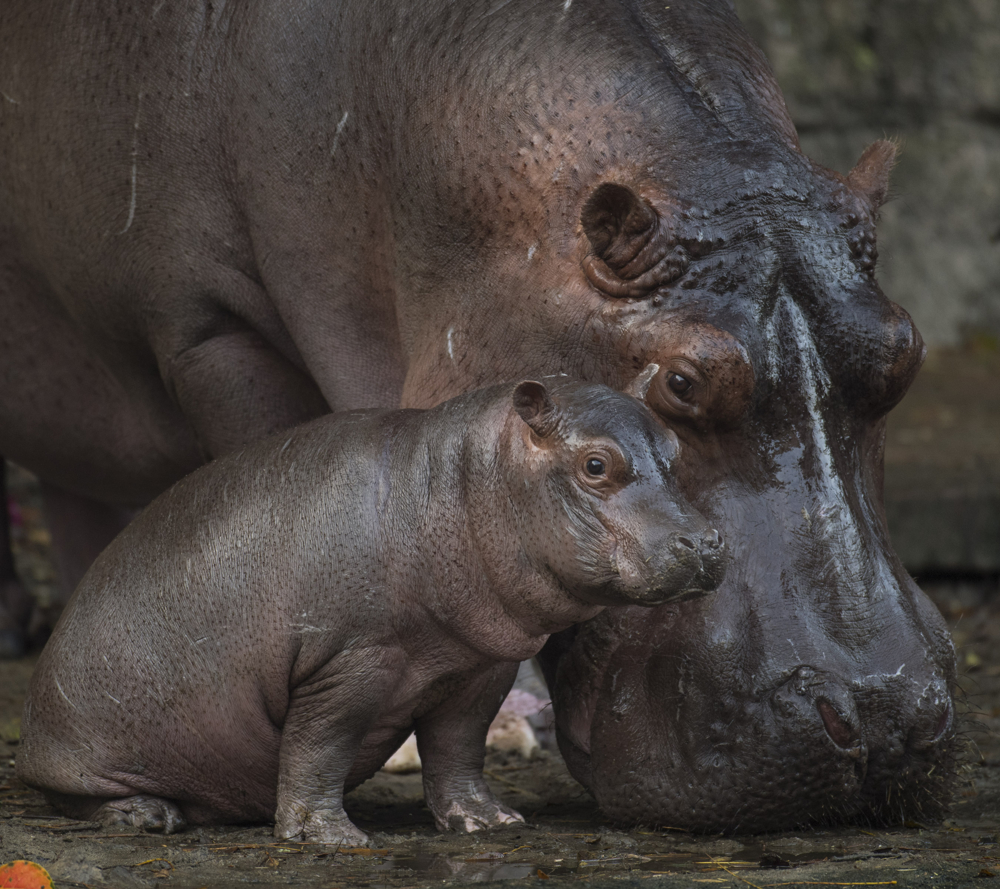 Disney’s Animal Kingdom revealed news about a baby Nile hippopotamus born at the park on January 13. As part of a magical moment on the theme park’s Kilimanjaro Safaris attraction, roughly a dozen Guests were the first to learn that the hippo calf is a boy, and his name is Augustus. Weighing in at 168 pounds, Augustus is the first hippo born at the park in 13 years. He is often seen staying close to his mom, Tuma, and is already winning over Guests with his playful nature.

The birth of Augustus marks another success for the dedicated and highly trained team of animal care experts at Disney’s Animal Kingdom, and it is an important contribution to the worldwide conservation and understanding of these amazing creatures. Nile hippos are a vulnerable species with a declining population. Augustus’ parents, Tuma and Henry, were chosen to breed through the Species Survival Plan (SSP), which is overseen by the Association of Zoos and Aquariums (AZA). The SSP ensures responsible breeding so there will be healthy and diverse animal populations for years to come.

Guests will see Augustus on Kilimanjaro Safaris and also during the Wild Africa Trek experience and be inspired to take action to protect hippos and other at-risk animals in the wild. To learn more about hippos, visit DisneyAnimals.com.

ANAHEIM, Calif. (Aug. 15, 2015) – Today, Disney announced a line-up of new attractions and entertainment coming to its theme parks around the world during the D23 EXPO 2015 in Anaheim, Calif.

Walt Disney Parks and Resorts Chairman Bob Chapek gave 7,500 lucky fans a behind-the-scenes look at what’s to come. He was joined by Imagineers working on these projects as well as legendary filmmakers James Cameron and Jon Landau who shared new details about Pandora – The World of AVATAR including the names of the land and E-ticket attraction – AVATAR Flight of Passage. Fans also got a chance to see Marvel legend Stan Lee in a cameo appearance where he posed as an unsuspecting fan during Iron Man’s dramatic entrance.

Among the many announcements Chapek shared were new and enhanced Star Wars experiences coming later this year to the Florida and California theme parks, plans for a new Toy Story Land at Disney’s Hollywood Studios, and more details on Pandora—The World of AVATAR, which is already under construction at Disney’s Animal Kingdom. Chapek also shared that Soarin’ Around the World will make its U.S. film debut at Epcot and Disney California Adventure taking guests to new places around the world. Additionally, fans got a preview of exclusive video of the first Marvel attraction planned for Disney parks, coming to Hong Kong Disneyland in 2016.

“From Disneyland’s 60th anniversary celebration to the anticipation of Shanghai Disney Resort, we’re in the midst of unprecedented growth and expansion around the globe,” said Chapek. “With these new announcements, we continue our legacy in creating innovative attractions, worldwide entertainment, and magical lands that take our guests into the worlds of stories they love.”

In addition to these announcements, Chapek talked about the exciting news announced earlier in the day by Chairman and CEO of The Walt Disney Company Bob Iger for plans to bring Star Wars-themed lands to Disney’s Hollywood Studios in Orlando and Disneyland park in Anaheim. Each 14-acre land will transport guests to a never-before-seen planet with two signature attractions, including a customized secret mission on the Millennium Falcon and an epic Star Wars adventure that puts guests in the middle of a climactic battle.

Details on each of the projects include:

From a new Star Tours adventure to Star Wars Launch Bay, from a new Jedi Training Academy to “Season of the Force,” soon guests will be part of both new and enhanced experiences at Walt Disney World Resort and Disneyland Resort.

The reimagining of Disney’s Hollywood Studios will take guests to infinity and beyond, allowing them to step into the worlds of their favorite films, starting with Toy Story Land.  This new 11-acre land will transport guests into the adventurous outdoors of Andy’s backyard.  Guests will think they’ve been shrunk to the size of Woody and Buzz as they are surrounded by oversized toys that Andy has assembled using his vivid imagination.  Using toys like building blocks, plastic buckets and shovels, and game board pieces, Andy has designed the perfect setting for this land, which will include two new attractions for any Disney park and one expanded favorite.

As part of the largest expansion in the park’s history, Disney’s Animal Kingdom will immerse guests into the world of Pandora, and the entire park will transform after dark with new nighttime entertainment experiences, offering guests longer days than ever before to experience this one-of-a-kind theme park.

Soarin’ Around the World in Florida and California

Next year, guests at Epcot in Florida and Disney California Adventure in California will journey to far-flung lands and fly above some of the world’s most unique natural landscapes and man-made wonders when the new Soarin’ Around the World makes its U.S. debut.

Iron Man landed at D23 EXPO today for a special appearance, and soon Hong Kong Disneyland guests will have the opportunity to meet and take photos with the Super Hero himself. Set to open in 2016, Iron Man Experience will be the first Marvel attraction at any Disney park, taking guests on an epic adventure over the streets and in the sky above Hong Kong. The adventure will begin at the new Stark Expo where guests board the Iron Wing to take flight and battle Hydra alongside fan-favorite Avenger, Iron Man.

About Walt Disney Parks and Resorts

In celebration of the 20th anniversary of the classic Disney film, The Lion King. Disney’s Animal Kingdom presents, Harambe Nights. A hard ticket event that includes a nighttime party, food, and a brand new concert, The Lion King – Concert in the Wild being shown in the all new Harambe Theatre.

END_OF_DOCUMENT_TOKEN_TO_BE_REPLACED

Disney’s Animal Kingdom is getting ready to undergo the largest expansion in the parks history. One of the new projects include, “Rivers of Light” a new nighttime spectacular. Reminiscent to World of Color from Disney’s California Adventure at the Disneyland Resort, this show will combine live music, floating lanterns, water screens and swirling animal imagery, and promises to be a innovative show unlike anything ever seen at a Disney park. The show will come to life on the broad, natural stage of the Discovery River, between Discovery Island and Expedition Everest.

Take a look at the just released Concept Art.