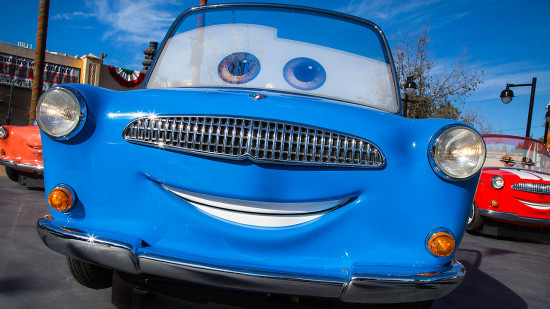 In this all-new attraction, Luigi will turn the tire storage yard behind his Casa Della Tires into a dance floor! Cars Land guests will be able to ride along with Luigi’s cousins as they move and spin to upbeat Italian music, performing the traditional dances of their hometown village.

Each dancing car will have its own high-spirited personality and signature dance moves – making every ride unpredictable, as you won’t know which way they will turn and spin next! Take a look at how Walt Disney Imagineering created this carefully choreographed dance in this behind-the-scenes video:

Luigi’s Rollickin’ Roadsters, the new attraction in Cars Land at Disney California Adventure Park, is rolling with fun and festivities. Twenty of Luigi’s cugini (cousins) are visiting from Carsoli, Italy, to help celebrate Race Day in Radiator Springs with music and dancing at Casa della Tires.

Guests are invited to join the excitement by hopping aboard miniature Italian roadsters, inspired by late 1950s micro cars. Each cousin performs the traditional dances of Carsoli, moving to upbeat music and Luigi’s singing in a precision-choreographed dance across what appears to be a trackless “dance floor.”

“Here at Luigi’s, the roadsters seem to have a mind of their own,” said Kevin Rafferty, Executive Creative Director of Walt Disney Imagineering, “When you come back to ride again, chances are you’ll enjoy an experience that’s different than the last time you rode – especially since each of the cars has a signature move they love to perform.”

The Cousins from Carsoli, Italy